TUESDAY, Feb. 23, 2021 (HealthDay News) -- It's been nearly a year since David Speal, 38, first fell ill with COVID-19, but a racing heartbeat remains a regular reminder of his brush with the new coronavirus.

Even the littlest thing -- not eating at the right time, not drinking enough water, too much exercise, a stressful encounter -- can send Speal's heartbeat soaring as high as 150 beats per minute.

"My autonomic nervous system is completely off-base. I can't control my fight-or-flight response," the New York City resident said. "My life is not my own anymore."

COVID-19 is a respiratory virus, but it has become notorious for producing the sort of long-term health problems that aren't normally associated with the common cold or the flu, experts say.

There have been a "large constellation of symptoms" linked to COVID-19 that can persist for months after the person recovers, said Dr. Allison Navis, neurology clinic director for the Icahn School of Medicine at Mount Sinai in New York City.

These "long-hauler" symptoms range from the physical to the psychological, experts have found.

For example, Mark Robbins complains of continuing fatigue and brain fog following his bout with COVID, which landed him in the hospital for three weeks and required mechanical ventilation to keep him breathing. But he's also dealing with some post-traumatic stress as well.

"Sometimes it's short-term memory. Sometimes it's feeling stressed out about a situation," said Robbins, 49, a financial adviser in Fishers, Ind. "There's definitely fatigue. My wife would tell you I'm not doing as well as I think I am, that I probably still need to rest even if I don't think that I do. You get to the evening and you're pretty bushed."

And these long-term symptoms aren't necessarily limited to those who've survived life-threatening COVID.

As many as 1 in 3 people who've suffered mild to moderate infections and didn't need hospitalization, still wrangle with various symptoms months after their illness, according to a new study published last week in the journal JAMA Network Open.

"We are certainly seeing people who were never hospitalized come in with persisting symptoms," said Dr. Kathleen Bell, chair of physical medicine and rehabilitation at the UT Southwestern Medical Center in Dallas. "There are a number of people who self-treat, self-quarantine at home who still may have been ill for two, three, four, five weeks, acutely ill, but managed it at home. Those people are coming in."

That pattern is confirming that the SARS-CoV-2 coronavirus that causes COVID-19 is "a little nastier than a lot of the other viruses we've had to deal with," said Dr. Ravindra Ganesh, an internist with the Mayo Clinic in Rochester, Minn.

Such long-term symptoms are usually associated with viruses like Epstein-Barr, West Nile and chikungunya, all of which are much less infectious than the novel coronavirus, Ganesh said.

"It has a severity that's closer to those than to most common viral pathogens," he said.

The most common long-haul symptoms related to COVID include fatigue, shortness of breath, cough, joint pain and chest pain, according to the U.S. Centers for Disease Control and Prevention.

"Fatigue seems to be the most common thing," Navis said. "It's a little unclear as to what's causing the fatigue."

Other reported symptoms include brain fog, depression, muscle pain, headache and heart palpitations, the CDC says. These symptoms seem to affect a number of different systems in the body -- cardiovascular, respiratory, renal, dermatologic, neurological and psychiatric.

Some have complained of numbness and tingling throughout their body, rashes and abnormal smells, Navis said.

"We really don't know what's causing these symptoms, but they're a major focus of the research right now," Navis said.

It's likely that different long-haul symptoms are being caused by different aspects of either the coronavirus itself or the way COVID-19 impacts the body, experts said.

For example, there are several competing theories to explain the brain fog of which Robbins and many other long-haulers complain.

"There was a patient who told me last week that he was employed full-time before getting sick, but after developing COVID he's afraid of being left alone in the kitchen," said Dr. Sikandar Khan, a research scientist with the Indiana University Center for Aging Research at the Regenstrief Institute in Indianapolis.

This fuzzy-headedness might be directly linked to the virus, he said, pointing to autopsies by German researchers that were able to isolate the coronavirus in the brain cells of patients who died from COVID.

"So we know the virus is causing direct invasion into the brain that's causing difficulties for patients," Khan said.

But brain fog also could be caused by COVID-19 inflammation that exacerbates existing circulation problems inside the brains of people with preexisting conditions like diabetes, high blood pressure or obesity, Bell said.

"People may find they may have been compensating very well for problems they had beforehand, maybe some minor cognitive impairment that they had, but when you put a trauma like this and a stress on the body, it may actually bleed over into becoming symptomatic for them," she added.

Another possible explanation for brain fog could be the stress and anxiety of a COVID infection, Bell added.

"For a large percentage of these people, we're actually seeing mental health reactions to this," she said. "There are a fair number of people who are demonstrating all of the symptoms of post-traumatic stress disorder, anxiety and depression."

The medical care that people received during their COVID infection constitutes yet another potential explanation for some long-haul symptoms, Bell added.

For example, the practice of "proning" patients -- turning them onto their stomachs to help ease their breathing -- might cause some unintentional nerve damage, Bell said.

"That puts a lot of pressure on nerves that don't usually get pressure in the body," Bell said. "We're seeing a lot of people with peripheral neuropathy after recovering from COVID in the hospital, because of the way they're being positioned lying on their stomachs. They may end up with weakness or paralysis in their arm or in their legs because of pressure on the nerves."

Heart issues on his boat

Speal suffered pneumonia as a result of his COVID and wound up being hospitalized, with blood clots in his lungs, a couple weeks after first falling ill.

"Honestly, if I had waited any longer to go to the hospital, I don't know if I would have made it through the following night," Speal said.

Blood thinners cleared up the clots and Speal never needed mechanical ventilation, but even in the hospital he started suffering from a racing heartbeat. Doctors released him with beta blockers to manage his heart rate, and Speal tried to return to his normal life.

"If I could get out of bed to use the bathroom, that was a feat. I couldn't even bathe myself, to be quite honest. That's where I was for a solid month, month and a half," Speal said. "I began to get better. I would take little walks around the apartment. Eventually I finally went out and walked to the corner, and then I started to take more walks."

The moment Speal realized that he'd be struggling with long-haul symptoms came when he tried to return to one of his favorite pastimes, saltwater fishing.

Doctors diagnosed Speal with postural orthostatic tachycardia syndrome, or POTS -- a condition in which the body can't properly regulate its heartbeat, particularly if someone goes from lying down to standing.

Other viral illnesses have been known to cause POTS, and it seems as though COVID does as well, said Dr. Ruwanthi Titano, a cardiologist who works with Speal at Mount Sinai's Center for Post-COVID Care in New York City.

"We have seen a remarkable number of patients with new-onset POTS who prior to this were very healthy, very active," Titano said. 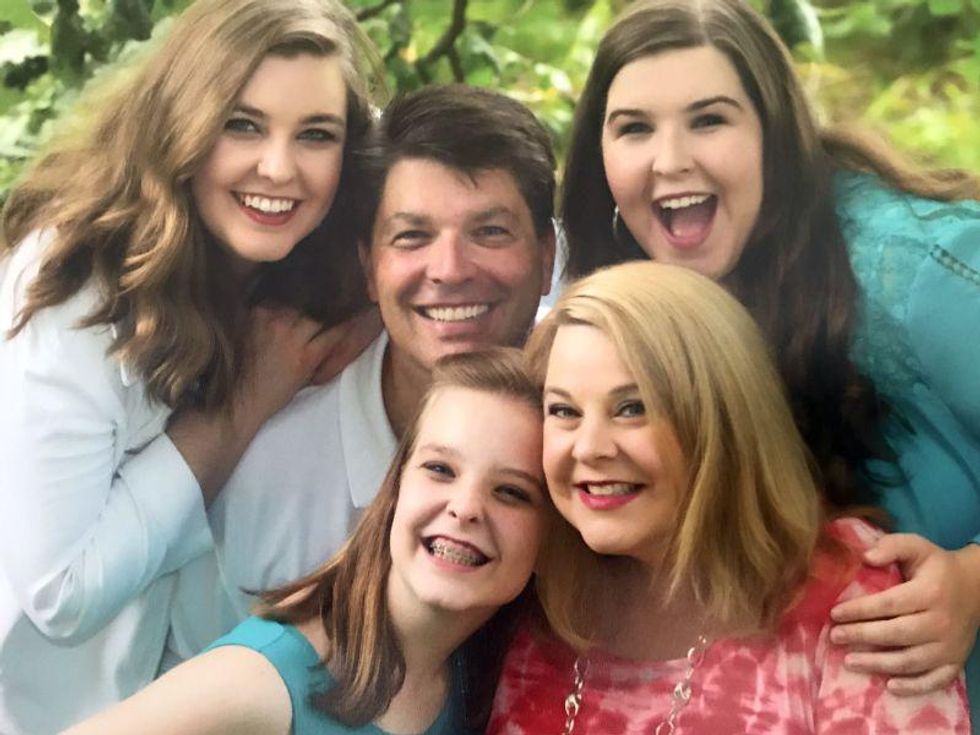 Mark and Elaine Robbins with daughters Elizabeth Garcia and Rebecca and Sara Robbinsassets.rebelmouse.io

To the ER in the nick of time

Robbins wound up in the hospital just before Thanksgiving after days of fever and a blood oxygen level that had dropped precipitously low. He'd been resisting his wife's entreaties that he seek emergency health, "in typical male fashion," he recalled.

"She texted the entire family and they all en masse ganged up on me via text," Robbins said. "In retrospect, I'm glad they did, because the doctors were very clear with me. They said a few more hours, and we can't guarantee what would have happened."

To save his life, doctors had to intubate Robbins and keep him sedated for two weeks. He wound up spending a total of three weeks in the hospital, followed by weeks at a rehabilitation facility.

"I had to learn how to sit up again, and walk with a walker, and then walk without a walker" due to the muscle atrophy he suffered while bedridden, Robbins said. "It made for a really crazy few weeks."

Hospitals across the nation have opened up post-COVID care centers to help people deal with long-haul health problems, Navis and Bell said.

One of the most worrying things about COVID long-hauling is that no one knows how long these symptoms will persist.

"Unfortunately, I think there is a group of patients who, depending on their other medical problems coming into this pandemic, are likely going to continue to have persistent symptoms and they may be permanent," Khan said.

Many post-viral symptoms like POTS tend to fade over time when caused by other pathogens, Titano said, but POTS can flare up with any new injury or insult to the body, even years later.

"The hope is with time those flares would become less frequent and less severe, and we're better capable of managing and rehabilitating them as they go," Titano said.

Speal says it doesn't take much these days for his POTS to flare.

"Any type of stress, even positive stress like when I do presentations or talk to my clients, it can just trigger me," said Speal, who works as a fatherhood counselor with the City University of New York. "It's difficult to do day-to-day activities sometimes, including just walking my daughters to school."

Speal has been working on breathing techniques that can slow his heart rate, and using modified exercises to improve his health. He's eating better and drinking lots of water.

"But if I miss a step or if I don't stick to the protocol, my body goes right back into that state of shock," Speal said.

When Robbins first left the hospital, he needed to be on supplemental oxygen constantly, but now he only needs it while sleeping.

"It's basically like going to the gym, except that the therapist going to be there checking your oxygen levels," Robbins said. "From their standpoint, they're trying to figure out when they can take you off supplemental oxygen."

Fatigue and brain fog continue to plague Robbins, and he's not sure how long it's going to last.

"There are times when I'll pick up my phone, and I'll look at my phone and can't remember why I picked it up," Robbins said.

He's also been having what his family calls "lemon curd" moments.

"In a normal situation, that's not a big deal, but I could tell my stress level was starting to rise," Robbins said. "My breathing was becoming more stressed. My daughter was looking at me, because she could tell I was starting to freak out because we didn't have lemon curd and I was going to have to make it, and I'd never done that before."

Robbins' wife calmed him down and went out to the store for the lemon curd. And now it's become a code word in the family -- "Don't have a lemon curd moment."

The U.S. National Institutes of Health has more on COVID-19 long-haulers.