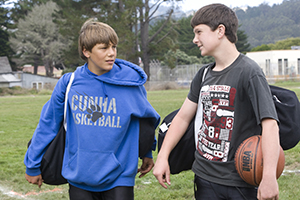 How much will my adolescent grow?

The teenage years are also called adolescence. During this time, the teenager will see the greatest amount of growth in height and weight. Adolescence is a time for growth spurts and puberty changes. An adolescent may grow several inches in several months followed by a period of very slow growth, then have another growth spurt. Changes with puberty may happen gradually or several signs may become visible at the same time.

There is a great amount of variation in the rate of changes that may happen. Some adolescents may experience these signs of maturity sooner or later than others. It is important to remember that these changes happen at different times for everyone. Being smaller or bigger than other boys is normal as each child experiences puberty at his own time.

What changes will happen during puberty?

Sexual and other physical maturation that happens during puberty result from hormonal changes.

In boys, it is difficult to know exactly when puberty is coming. There are changes that happen, but they happen gradually over a period of time rather than as a single event.

There are specific stages of development that boys go through when developing secondary sexual characteristics. The following is a brief overview of the changes that happen:

The following are additional changes that may happen for the male as he experiences the changes of puberty:

What does my adolescent understand?

The adolescent years bring many changes, not only physically, but also mentally and socially. During these years, adolescents increase their ability to think abstractly and eventually make plans and set long-term goals. Each child may progress at different rates, and show a different view of the world. In general, the following are some of the abilities that may be evident in your teenager:

Your adolescent's relationships with others

As your adolescent begins to struggle for independence and control, many changes may happen. The following are some of the issues that may be involved with your adolescent during these years: