Asthma is a long-term (chronic) condition causing swelling and narrowing of the airways. The muscles around the airways tighten and extra mucus is produced. These changes make it harder to breathe. Triggers are things that cause asthma flare-ups and make symptoms worse. Triggers may be dust, pollen, pets, infections, cold weather, smoke, air pollution, and exercise.

Exercise is a common trigger for many people with asthma. For some people, exercise and other things cause asthma symptoms. For others, asthma symptoms only happen with exercise or physical activity. In both cases, this is called exercise-induced bronchoconstriction (EIB). (It used to be called exercise-induced asthma.) This means that exercise causes the airways (bronchi) to narrow or constrict.

Living with EIB doesn't mean you need to give up exercise. Exercise is important for overall good health. It also helps keep the lungs and muscles used for breathing strong. Your body needs exercise. Work with your healthcare provider to do it safely and with as few symptoms as possible. 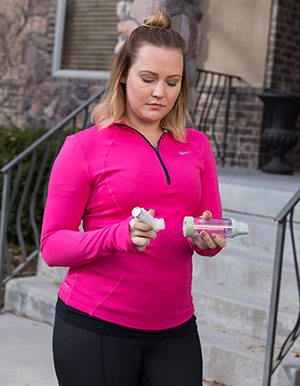 The cause of EIB

Experts don't know exactly why exercise causes narrowing of the airways. When exercising, the increased breathing in and out through the mouth may cause the airways to dry and cool. This may irritate them and cause symptoms. This is especially true when exercising outside in cold weather. Breathing in air pollution, chemicals, or allergens such as pollen may also be factors. You breathe more when you exercise. So a larger amount of possible triggers are breathed in.

EIB symptoms are the same as asthma symptoms. They include coughing, wheezing, and chest tightness 5 to 20 minutes after starting exercise. In some people, the symptoms can start after exercise. This is often the case if the exercise is strenuous and short. EIB can also include symptoms such as extra tiredness (fatigue) and feeling short-of-breath during or after exercise.

But that doesn't mean you should completely stop exercising. In fact, exercise is very helpful for people with asthma. It can improve your airway function by strengthening your breathing muscles. Talk with your healthcare provider for more information.

You can do things to help control EIB or asthma symptoms when exercising. First make a plan with your healthcare provider. And make sure you do the following:

Any activity can cause asthma symptoms. Sports and activities with short bursts of being active are often better for people with asthma. Some sports may be less likely to trigger symptoms. Swimming is one of them. The warm, humid environment, the use of upper body muscles, and the body position while swimming may be good for people with asthma (exercise-induced or not). One warning—the chemicals used to treat swimming pools are a problem for some people. Other recommended activities and sports include:

Sports that may increase the chance of symptoms include:

But with the right management and preparation, most people with EIB can do any sport or physical activity safely.