Do I Really Need a Fire Extinguisher?

You probably know already that a smoke alarm is by far the best home-safety investment you can make. For as little as $10, a smoke detector can help you literally rest assured that a fire won't catch you sleeping.

But you'd like to take the next step in fire protection. Perhaps you'd like to be able to fight a fire before it spreads through your home. Should you buy a fire extinguisher?

Yes, provided you know when and how to use it.

Fire extinguishers can be a small but important part of the home fire safety plan. They can save lives and property by putting out a small fire or suppressing it until the fire department arrives.

But there's an important addition to that statement: Don't even think about buying a fire extinguisher until you've already got working smoke detectors and a good home fire evacuation plan.

Fire safety experts advise that you attempt to extinguish a fire only if you have first made sure that everyone else has left or is leaving the building, and that someone has called the fire department. Remember, lives are more important than property.

If those conditions have been met, you should pick up the fire extinguisher and attack the fire. Be careful to make sure that at all times your back is to a safe exit. You'll also want to make sure that the fire is confined to one area. If it begins to spread to other areas, such as walls and curtains, you should retreat from the room if there is a chance the fire could surround you.

You also want to beware of smoke. If the room begins to fill to the point that you can't see or breathe, you should retreat.

The prompt use of a home extinguisher can smother a small fire before it spreads, but fire extinguishers can be dangerous in inexperienced hands. Fighting an electrical fire with a water-based extinguisher, for example, could give you an electric shock, and trying to put out a large or rapidly spreading fire with an extinguisher is useless and could leave you trapped in a burning building.

A grease fire in a kitchen can be especially dangerous. If you catch it early you may be able to put it out. But if a grease fire gets out of control, it can easily send a kitchen up in flames within three and a half minutes, leaving little time to escape.

So if you decide to buy a fire extinguisher, take the time to learn a bit about its proper use. 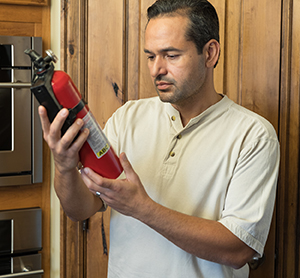 Don't burn a hole in your wallet

Just what do all those letters and numbers mean? They may sound confusing, but if you take a little time to understand the coding, you can get the most suitable fire extinguisher at the lowest price. Some tips:

For home use, you'll generally want an A-B-C-rated unit. It will work on all fires. The exception is the small B:C units sold for kitchen use. A 5-B:C unit can cost as little as $10, but it can be quite handy for putting out a stove fire before it gets out of hand.

OK, you know what the letters mean. But what does the "5" mean in 5-B:C? It's a measure of the unit's firefighting capacity. The formula gets a bit complicated, but generally the higher the number, the more powerful the extinguisher. You can expect a unit rated at 10-B to put out twice as much liquid as a 5-B unit.

Experts recommend that homeowners buy a multipurpose unit rated at 3A:40-B:C as a first choice. These cost about $40. But if this unit is too cumbersome, they suggest a medium-sized 2A:10-B:C multipurpose extinguisher (about $35).

© 2000-2021 The StayWell Company, LLC. All rights reserved. This information is not intended as a substitute for professional medical care. Always follow your healthcare professional's instructions.
Contact Our Health Professionals
Find a Doctor Request an Appointment Locations Services
Follow Us