Spiders are arachnids. This is the same group of animals that includes ticks, mites, and scorpions. All arachnids have 8 legs. Insects have only 6 legs.

No matter where you live, you'll find spiders in and around your home. Although all spiders have mouth parts that can bite, most spiders aren't dangerous to people. Depending on the type of spider, it's either because its venom isn't toxic to people, or its mouth parts aren't strong enough to bite through human skin.

There are 2 types of spiders found in the U.S. that can cause illness in people. One type is the widow spider. The black widow is the best known. The other type is the recluse spider. The brown recluse is the best known. A bite by either type usually isn't deadly, but it may make a person very sick. It's important to get quick medical help if you think you've been bitten by either type of spider.

You may not notice a bite by either a black widow or a brown recluse spider at first. The bite is often described as feeling like a pinprick or a light sting.

Children are more sensitive than adults to spider bites because of their smaller body size. But deaths from bites either of the black widow or the brown recluse are very rare. It is important to protect children from spider bites as the symptoms described below can be more severe in children

If you are bitten by either a black widow or brown recluse:

Both the black widow and brown recluse spiders are shy and stay away from areas of a home with lots of activity or open spaces. They prefer quiet corners of a home, dark areas under seldom-moved furniture, garages, sheds, and wood piles. Neither spider is overly aggressive. They usually bite only when provoked or trapped against the skin.

Teach your children to not reach into areas where spiders may live without first checking to make sure no spiders are there. Webs and dead insects in an area are usually a sign that spiders are active there. Children also shouldn't play around rock piles and woodpiles.

If you do yard work that includes handling logs or leaves, wear gloves. Shake out any blankets or clothes, and check the inside of shoes that have been stored in an attic or basement before using them. Carefully check shoes or boots stored in a mudroom or garage before putting them on. It will also help to get rid of clutter, keep items off of the floor, store clothing and shoes in sealed plastic bags, and tuck bedding under mattresses so that nothing touches the floor.

You can limit the number of spiders in your home by having it sprayed with insecticide. Be sure to use only a licensed pest control company to do this. Insecticides carry their own risks, particularly if children, pets, or pregnant or nursing women are in the home.

There are 5 different species of widow spiders, including the black widow, in the U.S. Of these, only 3 are black. And only the black widow has the classic reddish-orange "hourglass" shape on its belly. The bite of any of the widow types can cause a fairly severe reaction. The black widow causes the most frequent and severe poisonings. Black widows are not aggressive spiders unless they are provoked. They generally live in dark, quiet, undisturbed areas in and around a home such as closets and basements. 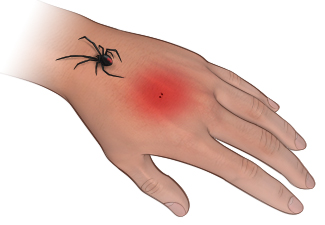 In severe cases, a person may become unconscious or stop breathing. Death from a black widow bite is extremely rare. If it does happen, it is more likely in children younger than 2 or in adults older than 50.

There are 12 species of recluse spiders, including the brown recluse, in the U.S. Only half of these are responsible for bites that have a major reaction in people. Most of the spiders in this group have a violin or fiddle-shaped marking on the upper part of their body. The base of the violin is at the front of the head and the neck of the violin points toward the rear of the spider. Besides the brown recluse, the other poisonous spiders in this group can be gray, orange, reddish-brown, or pale brown. Like the black widow, the recluse spiders like quiet, dark, undisturbed areas in and around the home. They are nighttime spiders, so they come out mostly at night or when the light is dim. 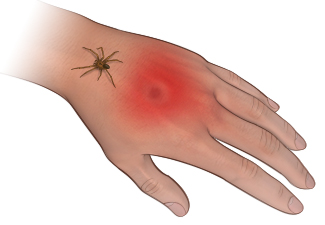 Other symptoms may include fever and chills, nausea and vomiting, joint pains, and rashes.