What are some common nipple problems?

Nipple conditions are a common noncancer (benign) breast condition that affect many women. Some problems are related to lactation. Others are not. Like all breast conditions, any nipple problems should be reported to your healthcare provider right away. This can help you get a prompt diagnosis and start treatment. 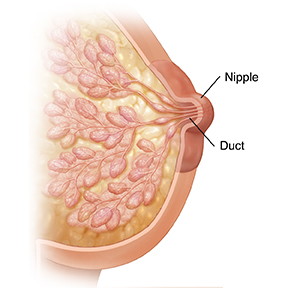 As a woman nears menopause (around her late 40s or early 50s), the mammary ducts located under the nipple become widened (dilated). This normal process of dilation of the milk gland is called ectasia.

Ectasia is a noncancer breast condition. In some cases, it can lead to a blockage of the ducts. Then fluid may become pooled and leak into the nearby tissue. This causes infection, chronic inflammation, or a pus-filled infection called an abscess. If there is an infection (called periductal mastitis), it may cause scar tissue to form. This draws the nipple inward. This infection may also cause breast pain and thick, sticky nipple discharge.

Treatment will depend on your symptoms, age, and general health. It will also depend on how severe the condition is.

Treatment for ectasia generally involves treating the symptoms. This may include warm compresses or antibiotics. In some cases, surgery is needed to remove the affected breast ducts.

What is intraductal papilloma?

An intraductal papilloma is a small, wart-like growth that bumps out into the breast ducts near the nipple. This causes a bloody or sticky discharge. Any slight bump or bruise near the nipple can also cause the papilloma to bleed. If the discharge becomes annoying, the duct can be surgically removed. This can often be done without changing the look of the breast.

What about other types of nipple discharge?

Nipple discharge can be alarming to many women. But discharge that occurs only when the nipple and breast are squeezed may not be a cause for concern. The risk of cancer when nipple discharge is the only symptom is fairly low.

A lump with the discharge will be of primary concern to your healthcare provider. But keep in mind that breastfeeding women may have a lump under the areola, and discharge. This can be caused by lactational mastitis that occurs with a pus-filled infection (abscess).

Galactorrhea is a milky discharge from both nipples, when a woman is not breastfeeding. This is often due to an increase in the hormone prolactin, which produces milk. This condition may occur if you take sedatives or marijuana. Or it can be caused by high doses of estrogen. Women who have this often have irregular menstrual periods. Or their periods have stopped. In some cases, galactorrhea may be caused by a pituitary gland tumor. You may need blood tests and an MRI if your healthcare provider thinks you need them.

How is nipple discharge diagnosed?

Your healthcare provider will likely want to find out if the discharge is coming from 1 duct or several. Multiple duct discharge is nearly always benign. It is likely due to changes such as ectasia. Discharge coming from a single duct may be more significant. But if mammography shows no abnormality, surgery may not be needed.

Nipple discharge can be different colors and textures. Your healthcare provider may take a sample of the discharge and have it checked in a lab to confirm a diagnosis.